Home » Shift2Rail presents its vision for the railway systems of the future to more than 3,500 professionals

Shift2Rail presents its vision for the railway systems of the future to more than 3,500 professionals

Shift2Rail brought railway transport mode to a prominent spot at the Transport Research Arena (TRA) Conference, which took place on 16-19 April 2018 in Vienna, Austria. Seizing yet another opportunity to show its progress towards delivering the European railway systems of the future, the Shift2Rail JU presented an impressive stand at the Transport Research Arena Conference in Vienna to a crowd of 3,500 professionals.

EU Commissioner for Mobility and Transport Violeta Bulc visited the S2R stand and expressed her support to Shift2Rail. “Today, transport is reinventing itself. We need to co-shape the future mobility together and drive change with new concepts”, Ms. Bulc said earlier in her TRA opening remarks.

The new S2R innovation capabilities map was the main attraction at the S2R booth. Using this interactive tool, visitors could experience how Shift2Rail R&I will contribute to building the capabilities of the railway systems of the future, accelerate multimodality and become the backbone for mobility of people and goods. The JU also included a map on its stand depicting the location of the 343 entities from 27 European countries participating in the initiative – working together to move the innovation in the rail eco-system forward.

During the conference, Shift2Rail also announced the launch of its Rail Research & Innovation Awards, aimed to recognise the commitment and progress achieved by S2R projects in three different categories: digitalisation, decarbonisation and project management.

Shift2Rail’s Executive Director Carlo Borghini had several opportunities to present the Shift2Rail vision in front of the TRA audiences including when Mr. Borghini together with Commissioner Bulc presented the 2018 TRA Visions for Young Researchers Award in the rail category.

Mr. Borghini also participated in a panel discussion on enabling and implementing research and innovation strategies. “We are here to make the vision of a better service for passengers a reality”, he said. “For each 50 cents invested we need to have 1 euro worth of return for EU citizens”.

Nine Members of the Shift2Rail JU displayed their work in the exhibition area, allowing visitors to get a broader perspective on the progress towards advancing rail transport across Europe performed by Shift2Rail partners.

Pictures from the event 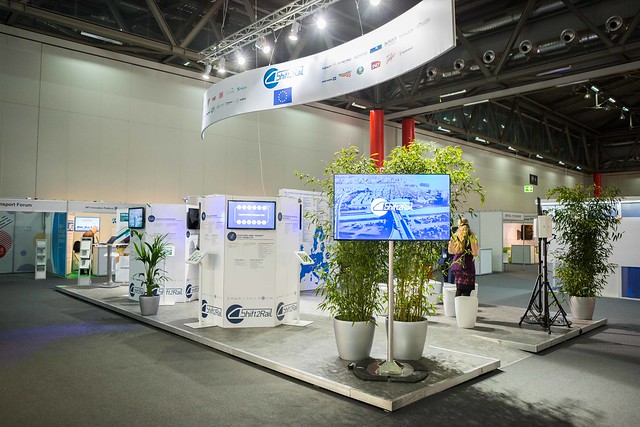